We’ll start by showing the following figure that shows an example of using BRISK to match between real world images with viewpoint change. Green lines are valid matches, red circles are detected keypoints.

As you may recall from the previous posts, a binary descriptor is composed out of three parts: 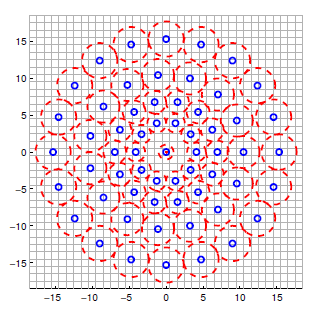 Long pairs are used in BRISK to determine orientation and short pairs are used for the intensity comparisons that build the descriptor, as in BRIEF and ORB. The

To illustrate this and help make things clear, here are figures of BRISK’s short pairs – each red line represent one pair. Each figure shows 100 pairs: 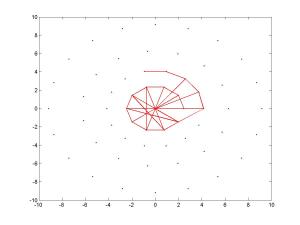 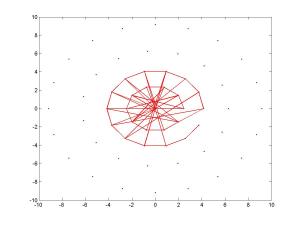 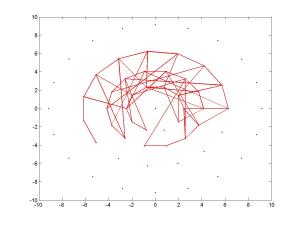 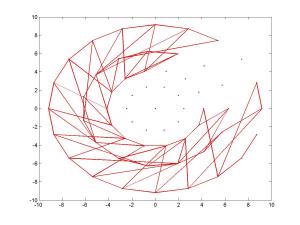 BRISK is equipped with a mechanism for orientation compensation; by trying to estimate the orientation of the keypoint and rotation the sampling pattern by that orientation, BRISK becomes somewhat invariant to rotation.

For computing the orientation of the keypoint, BRISK uses local gradients between the sampling pairs which are defined by

Where g(pi,pj) is the local gradient between the sampling pair (pi,pj), I is the smoothed intensity (by a Gaussian) in the corresponding sampling point by the appropriate standard deviation (see the figure above of BRISK sampling pattern).

To compute orientation, we sum up all the local gradients between all the long pairs and take arctan(gy/gx) – the arctangent of the the y component of the gradient divided by the x component of the gradient. This gives up the angle of the keypoint. Now, we only need to rotate the short pairs by that angle to help the descriptor become more invariant to rotation. Note that BRISK only use long pairs for computing orientation based on the assumption that local gradients cancel each other thus not necessary in the global gradient determination.

As with all binary descriptors, building the descriptor is done by performing intensity comparisons. BRISK takes the set of short pairs, rotate the pairs by the orientation computed earlier and makes comparisons of the form:

You probably ask what about performance. Well we’ll have a detailed post that will talk all about performance of the different binary descriptors, but for now I will say a few words comparing BRISK to the previous descriptors we talked about – BRIEF and ORB:

Stay tuned for the next post in the series that will talk about the FREAK descriptor, the last binary descriptor we will focus on before giving a detailed performance evaluation.